A taxonomic revision published in Adansonia ser. 3, 37 (2) disrupts our understanding of Canarium, a woody genus of Burseraceae (frankincense family), resulting in a reinterpretation of its ecological role in Madagascar and a better outlining of the  natural reserves areas. Research was led during 10 years in a very classical approach, combining herbariological study and field work, by two botanists and one primatologist. It resulted in the recognition of 33 species, whose 27 are new for science, the “Grande Île” becoming thus a new primary diversity center for the genus, rather comparable to that known yet in the Malesian region. Moreover this paper suggests firmly a parallel evolution with frugivorous lemurs - only efficient vectors for seeds dispersal -, and in this scope proposes to strengthen the protection of forest corridors between the different reserves, through which genic flows may go. The genus Canarium is a structuring component of the lowland humid forests, of a great ethnobotanical and pharmacological interest (by resins mainly), its study remained until now difficult, due to a very incomplete sampling, sexes being sharply separate and ripe fruits often unfound. The authors have built a practical identification key, taking first in account vegetative features, using the last advances in leaf architecture (especially venation) and bringing to the fore some secondary sexual characters. 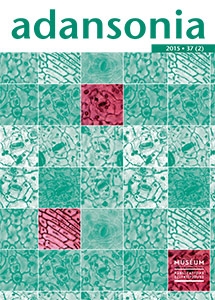 Index of taxonomic and nomenclatural novelties

A revision of Syzygium Gaertn. (Myrtaceae) in Indochina (Cambodia, Laos and Vietnam)

A revision of Canarium L. (Burseraceae) in Madagascar

Adansonia is indexed in :