Atlas of Crayfish in Europe

Crayfish are important as part of our natural heritage and represent key elements in freshwater ecosystems. Their conservation favours the protection of the aquatic environment and water resources and they have a cultural and economic value in Europe. However, the loss of populations in the wild is exacerbated by the degradation of water quality due to human population pressures. Even if habitats are restored and species reintroduced, their effective management requires the understanding of impacts of translocation of nonindigenous crayfish species, particularly with the spread of crayfish plague. The first part of this atlas deals with systematics and phylogeny, followed by a general description of habitats and threats in the second part. The third part describes current knowledge of the five indigenous species, seven non-indigenous species and three recently discovered non-indigenous species. The fourth part deals with diseases and the fifth part describes conservation and management, including education and legislation. The final part is intended to generate awareness of indigenous stocks. Basic information are thus widely available across Europe, both for administrators and the general public. A bibliography, a glossary and a species identification key complete the volume. 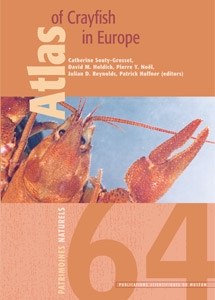