The variation in the living world, and in humans as living creatures, is general, as is the propensity of life to spread in terms of space and time. Thus, diversification, migrations and contacts have been and remain key factors in the continuity of lineages of living beings, humans included.

“Currently, the conditions under which people are leaving their countries have sparked numerous controversies. 2018, with its myriad political shifts on the subject, attests to this controversy, be it over boats attempting to cross the Mediterranean or border crossings between the United States and Mexico. Collectively, we label the people involved in these movements ‘migrants’. Through the magnifying glass of the media, we forget how few their numbers actually are compared with human mobility as a whole. Through the magnifying glass of politics, the theme of ‘migrant crisis’ is ably exploited”. 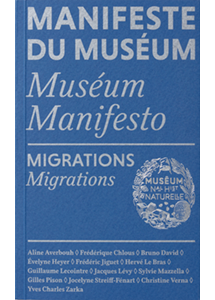