A. N. Duchesne's drawings for his Histoire naturelle des fraisiers

Besides being a remarkable 18th century gardener, and a renowned strawberry specialist who corresponded with the greatest naturalists of his time, Antoine Nicolas Duchesne was also a gifted artist. A curious mind, keen on observing and explaining biological diversity, and a forerunner of evolution and genetics, he did not only grow his plants: he studied their biology, he crossed them, he constantly experimented at the yet blurred frontier between variety and species. His observations, which attracted Darwin’s attention, were not only written but were also illustrated by his own precise and detailed drawings. This led to the plates on strawberries which still represent an essential and unavoidable reference. This is why it was important to publish the works of this pioneer in methods and ideas which were to develop in the following century and revolutionise not only botany but also the way the organisation and functioning of the living world were conceived. This volume at last makes available the hitherto unpublished plates of this pioneer, this “cultivating gardener” as he liked to call himself, who inspired the “deep naturalists” with whom he sometimes dared enter into scientific controversy. Duchesne’s drawings, which are kept at the Muséum national d’Histoire naturelle, are published along with his own comments, to which are added the present-day comments of the volume’s author, Professor Günter Staudt. Professor Günter Staudt, former head of the division of genetics and cytology of the Siebeldingen Federal Research Centre for Grapevine Breeding (1967-74) and former director of the Freiburg in Breisgau State Institute of Viticulture (1974-91), has mainly devoted his research to the study of the growth, history and genetics of cultivated plants. An acknowledged specialist in strawberry biogeography, genetics and systematics, he is also an expert on the reproduction and development biology and on the cytogenetics and evolution of wheat, barley and especially vine. 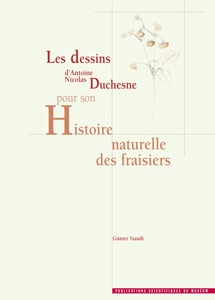