For the first time, this book makes available to a wide readership, not only to an educated audience, high-resolution reproductions of all the 258 paintings of gourds of the genus Cucurbita, figuring about a hundred cultivars, kept at the Bibliothèque centrale of the Muséum national d’Histoire naturelle, made in the 18th century by the talentuous Antoine Nicolas Duchesne, of the Royal Garden in Versailles, a forerunner of genetics and evolution. This book by Dr. Harry Paris, a leading expert of Cucurbitaceae, is written both in English and French and is aimed at scientists (e.g., botanists, geneticists, agronomists, horticulturists, science historians) as well as more general readers including gardeners, above all those very numerous fond of cultivated plants, particularly of Cucurbitaceae. Its large format (320 x 440 mm), the diversity and magnificence of its plates and the beauty of its presentation will also attract bibliophiles. This volume is not only the first publication to contain Duchesne’s naming and classification of the three economically most important species of Cucurbita, it also contains Duchesne’s summary of his investigations with this genus. The plates are accompanied by reprinting of appropriate abstracts from Duchesne’s Essai sur l’histoire naturelle des courges together with, by Harry Paris, commentaries on the illustrations with an analysis of existing published and unpublished documents concerning these plates. As for his work on strawberries, here once again is stressed the unfailing tenaciousness and extraordinary sense of observation of Antoine Nicolas Duchesne coupled with quite original and premonitory evolutionary ideas.

Dr. Harry Paris, born in Brooklyn, New York City, is a Senior Research Scientist of the Agricultural Research Organization (ARO) the research arm of Israel’s Ministry of Agriculture. He specializes in the genetics, breeding, and crop history of cucurbits, especially pumpkins and squash. His early interest in horticultural science, particularly of cucurbits, led him to major in Biology at the State University of New York College at New Paltz, from which he graduated magna cum laude in 1973 and to continue to graduate work in the Department of Horticulture & Forestry at Rutgers - The State University of New Jersey, from which he received his Ph.D. in 1978. Immediately thereafter, he moved to Israel, joining the Department of Vegetable Crops of the ARO, at its Newe Ya’ar campus in the north of the country. As part of his investigations into the genetics and history of pumpkins and squash (Cucurbita species), he was intrigued by the mention of the existence of 18th century colour illustrations of Cucurbita fruits painted by a French investigator named Duchesne, who was also cited as full or partial authority of the names of two species of pumpkins and squash. Years of sleuthing led to the eventual tracking down of these gorgeous, life-like paintings at the Central Library of the National Museum of Natural History in Paris and to the discovery of the 46-page, duodecimo book Essai sur l’histoire naturelle des courges (Essay on the Natural History of the Gourds), authored by Duchesne and published in Paris in 1786, copies of which were also found in two libraries in Paris and one in London. These discoveries led him to write this book in appreciation of Duchesne’s legacy.

Volume's quote :
PARIS H. S. 2007. — The drawings of Antoine Nicolas Duchesne for his Natural History of the Gourds. Muséum national d'Histoire naturelle, Paris, 454 p. (Des planches et des mots ; 4).
* To see the promotions applied to this product, add it to your cart (see "My cart") 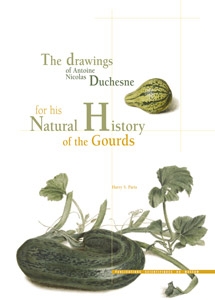