In 20th century France, Théodore Monod has stood as an icon for desert exploration. In his older days, cherished by the media, he became a symbol of the loneliness, harshness, and dedication to field work in the Sahara. Founder and director of the Institut fondamental d’Afrique noire (that he managed for nearly twenty-five years), he was also a professor at the Muséum national d’histoire naturelle (where he worked all over his career) and a member of the French Academy of Sciences. He was a good speaker and a gifted and prolific writer in fields as diverse as zoology, botany, geology, archaeology and prehistory, ethnology and anthropology, history and history of sciences, ecology and environment, humanism and philosophy, even poetry. The present volume collects the references of his writings over ninety years (1915-2004), representing no less than two thousands one hundred and seventy-seven entries. Whereas half of them are strictly academic publications, over a hundred were written for the general public. His best-seller, Méharées, was published in twenty-two editions in several languages. Other writings reflect the philosophical and religious thoughts of this engaged naturalist concerned about the world around him. The list of taxa described by Monod, and the taxa and place names named after him, are a tribute to his interactions with the scientific community and his celebrity with the public. An inventory of the Monod archives deposited with the Central Library of the Museum concludes the work. 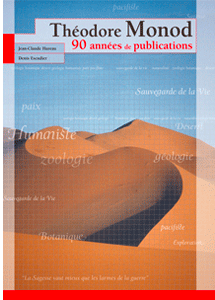