This page lists the articles of the journal Anthropozoologica ; you can filter the content (multiple choices) using the form below.

Pigs occupy a unique place in many contexts, in both modern and non-modern societies, in Europe, the Americas, Africa, Asia and Oceania. From defilement through avoidance to attachment through domestication, the relationships that humans have with suids are expressed in many ways: predation, ritual intermediation, feeding practices, accounting management, statistical evaluation, scientific manipulation... As animals with polarised values, they possess an extraordinary evocative potential almost everywhere.
In several regions of New Guinea where pigs play a major role, the attachment of humans to their own pigs is such that their consumption is thought to be an act of cannibalism. In the West, the pig feeds a particularly enduring and well-shared imaginary world. Conveyed through multiple narrative forms, it condenses symbolic contents that continue to be transmitted with efficiency. It is also one of the rare animals protected by a saint, Anthony. A sympathetic and vulnerable figure, he lends his form and attributes to electronic mascots or to strategy video games (kochonland) that promote the protective and responsible attitude of players. From ancient Mesopotamia to present-day South-East Asia, Suidae are used in divinatory practices, such as haruspicine. They are then credited with an extraordinary lucidity and sensitivity, or they are seen as privileged intermediaries between different registers of being (that of the divinities or spirits and that of men). In sacrificial practices, as in the most current acts of xenotransplantation, pigs are used as substitutes for humans, because of their shared symbolic values or their anatomical and genetic proximity.
Conversely, Suidae feed just as many negative images (cf. the hashtag ‘Swing your Pig’). Innumerable taboos mark their consumption. Considered impure, the blood and flesh of pigs are strictly avoided in most Islamic currents and in Judaism. In other places, these substances are seen as agents likely to impoverish anyone who abuses them. As for the wild boar, the robustness and tenacity of which it is the emblem are often preceded by its harmful potential and by the unreasonable proliferation with which it is charged. Countless times condemned to the scaffold by Catholics in medieval times, the mark of the pig seems indelible in the insults that refer to it. It evokes voraciousness on a dietary level and translates an unbridled morality on a sexual level.
As a contrasting subject-object, the gestures and speeches concerning it attest to the ambivalence of these "singular beasts", to use C. Fabre-Vassas' expression. Whether they are made to play important roles or are attributed some of the faults of this world, whether they are "deified" or demonised, Suidae occupy important places in communities spread over all the continents. Therefore, no synthesis will be able to point out all the facets.
More modestly, this issue intends to document the relationships that are established between humans and pigs, in ritual and plural contexts. It aims to highlight the diversity and importance of the anthropological trajectories that these ungulates allow us to trace. It aspires to highlight the centrality of the places accorded to these animals, independently of the heterogeneity of the manifestations of this centrality, and independently of the contradictions that pull them apart. 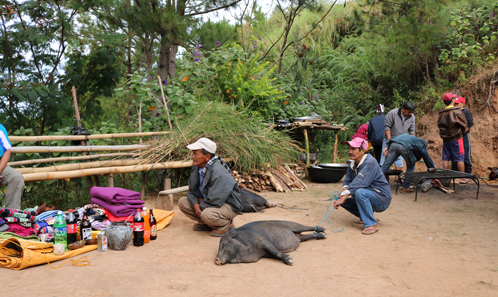 This article is a part of the thematic issue Suidae in ritual contexts in contemporary times edited by Frédéric LAUGRAND et al.
Download full article in PDF format See article
Back to journal