The study of exceptional remains (several skulls and a complete skeleton) of a 65 MY old placental mammal from Bolivia, provides a good understanding of the cranial anatomy, biology and evolution of the first mammals which lived in South America just after the large dinosaurs disappeared, 66 MY ago. This mammal is a Pantodont named Alcidedorbingya, in honour of Alcide d’Orbigny, famous naturalist voyager of the Museum during the XIXth century. Pantodonts constitute a group of mammals from the beginning of the Tertiary, which disappeared 40 MY ago. They lived essentially in northern continents (China, North America, and Europe). They were of small (rabbit) to large size (cow) and were omnivorous. Alcidedorbignya is the only austral pantodont, the oldest, and the smallest known.

The CT scanner of the MNHN allows the authors, a reconstruction of the arterial and venous passageways of the basicranium, thus approaching an ancestral pattern of blood circulation of the first placental mammals. The complete skeleton of Alcidedorbignya, was also CT scanned, allowing virtual reconstructions of several life positions.  Alcidedorbignya was terrestrial, but also capable of a bipedal position on its hind limbs and of climbing as is observed in the Recent squirels. This ability allowed Alcidedorbignya to escape the numerous crocodiles, which lived with it in a large Amazonian-like alluvial plain.

These results have been obtained thanks to the unprecedented completeness of the specimens, taking into account their geological age, in which the most common remains are only isolated teeth. 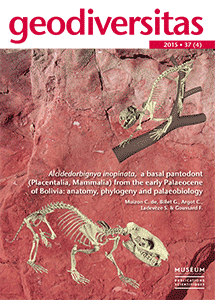 This article is a part of the thematic issue Alcidedorbignya inopinata, a basal pantodont (Placentalia, Mammalia) from the early Palaeocene of Bolivia: anatomy, phylogeny and palaeobiology
Download full article in PDF format See article
Back to journal