This book is intended both for naturalists and a wider readership. This is a scientifically rigorous text which everyone can understand. It shows the main biological features of the bats of French Guyana, and it is followed by an illustrated key based principally on external characters, making identification possible for most of the 100 species inventoried in the Département. The photos of 57 species are presented in colour plates, revealing the surprising diversity of the face, which is a consequence of various adaptations. They are insectivorous, using numerous strategies, or carnivorous, fish predators, frog hunters, blood suckers, nectar and pollen eaters. They occupy all levels of the forest, often exhibiting surprising ways of life. A chapter is devoted to the part they play in forest regeneration. 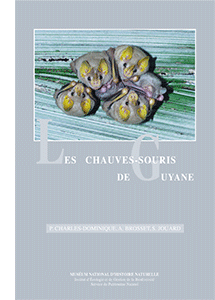