The Atlas of Orthoptera and Mantodea of France is based on some 42 600 records, gathered essentially since 1960. The occurrence of 201 orthopteran species has been confirmed during this period, of which six are non-native,  three of them apparently well established. The historical occurrence of 14 other species was not confirmed during the study period. The modern French orthopteran fauna can be estimated at 215 to 220 species, with a dominance of Eurosiberian taxa. There are 23 endemics, nine of them in Corsica. The main threats affecting the French Orthoptera are habitat destruction and chemical pollution. Species that fly well and disperse easily are able to recolonise lost areas, and are naturally more resistant than species with low dispersal abilities, some of which are in a critical situation. Seven species of Mantodea were found out of nine previously reported. One has not been found again since its description. On the contrary, inadequate recording may account for another not having been found again. The French mantid fauna is mostly Mediterranean, with a single species present almost throughout France. A distribution map is given for each species  encountered during the survey. A short text mentions a few features of its biology and distribution. 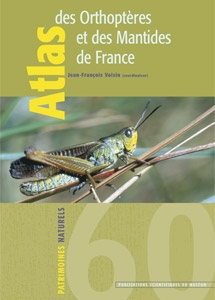