This is the first comprehensive book on Amphibians in French Guiana. It is the result of over thirty years of work and prospecting. It’s intended for naturalists, managers, teachers and reseachers. It’s objective is also to be a tool for the managers in order to contribute to the conservation of the communities. 103 Anuran and 7 Gymnophionan species are listed. 3 new species are described, 7 are unnamed and 6 others are recorded for the first time in French Guiana. Each species is described by its main characters, a colour photograph or a drawing, and a distribution map. One chapter deals with the reproduction of these species. Another deals with those naturalist travellers who collected Amphibians in French Guiana over the last two centuries. The appendix list vernacular names in several languages used in French Guiana. 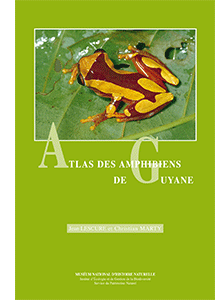