The Hettangian stratotype is an international reference in geology. It is also what has given international stature to the small town of Hettange-Grande, in Moselle, where it was originally defined. After some debate, the Hettangian stage was created in 1864 by Eugène Renevier, impressed by the work of his predecessor Olry Terquem on some strata particularly rich in fossils. This historical stratotype, well worth protecting, obtained the status of National Nature Reserve in 1985. Bildstock, paving cobbles, oven stones and other artifacts show how the sandstone material extracted from the stratotype site was used.
Well documented and richly illustrated, this book summarizes all the knowledge acquired on the Hettangian stage at its stratotype and in the Belgo-Luxembourger Lorraine while also covering more briefly other sites of the same age in France.

Winner of the 2013 prize of the Académie Nationale de Metz.

Micheline Hanzo is a sedimentologist and a retired lecturer from Henry Poincaré University in Nancy. She has also been curator and manager of the Hettange-Grande nature reserve, where she continues to work towards the enhancement of geology and the preservation of the geological heritage. She also contributes to the Geological Heritage commission of the Réserves Naturelles de France network. 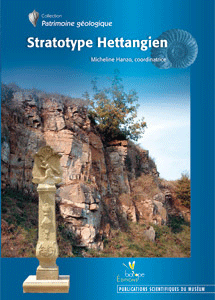