The writer Montesquieu, in his castle of La Brède, could not possibly have imagined that in 1857 Karl Mayer would designate part of the La Brède and Saucat estates as the international reference for a particular geological stage. Thus came into existence the Aquitanian stage, whose stratotype is today protected inside the Geological Nature Reserve of Saucats-La Brède. More than 150 years after the creation of the Aquitanian, this book gives a historical and scientific overview of this marine stage of the Cenozoic. The people who contributed most to its study over these years are acknowledged with short biographies. All the biological groups of the rich fauna and flora of the Aquitanian beds of the eponymous Aquitaine region are treated, and many are pictured. New data on subjects such as palaeomagnetism, continental flora and core-samples are introduced, and the book includes a CD-ROM featuring the complete list of the more than 2,000 fossil species identified in Aquitaine’s Aquitanian. The book also describes several other sites in France where the Aquitanian is significantly represented, and retraces how people have used materials dating from this period in time.
The sheer scale of the collective work and input involved makes this book much more than a synthesis on the Aquitanian stage stratotype. It constitutes a fine example of cooperative scientific research and a useful tool for the enhancement of local and international geological heritage.

Laurent Londeix is a palaeontologist specialized in dinocysts and a lecturer at Bordeaux University. His research mostly deals with Cenozoic palaeoclimatology and biostratigraphy. He has been manager of the Geological Nature Reserve of Saucats-La Brède for many years and is also a member of the Collections commission at Bordeaux University. 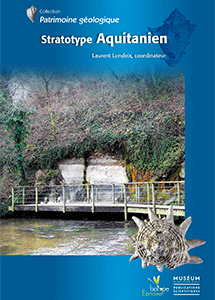