Tropical Deep-Sea Benthos, a continuation of Résultats des Campagnes MUSORSTOM, is a series dedicated to the inventory and description of the deep-sea fauna of the world, with special emphasis on the most extensive, yet remote and least explored, region — the Indo-West Pacific. The comprehensive series of marine expeditions undertaken by the French Muséum national d’Histoire naturelle and the Institut de Recherche pour le Développement (IRD) continue to collect many new, strange and sometimes colourful invertebrates.

The present volume includes for the first time results from recent expeditions within the New Caledonian Exclusive Economic Zone (EEZ), reporting 98 species (including 57 new species) of stylasterid corals and one new calcified hydractiniid. This region, including numerous seamounts, submarine ridges, and small islands, is ideal for stylasterids, contributing to making it the most species-rich marine region in the world for this taxon.

Stephen D. Cairns is a senior research-scientist at the Department of Invertebrate Zoology, National Museum of Natural History, Smithsonian Institution, where he has worked since 1976. In addition to Stylasteridae, his favorite group, he has also published on deep-sea Scleractinia and primnoid octocorals. To date, he has described over 500 new species of deep-water corals. 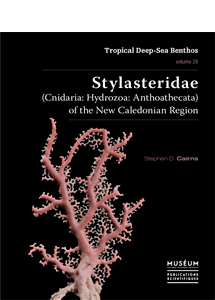