Résultats des Campagnes MUSORSTOM is an ongoing series on the deep-sea fauna of the tropical Indo-Pacific. Initially focussed on the New Caledonia region, the series has now expanded to cover other South Pacific islands and island groups, in particular Vanuatu, Wallis and Futuna, Fiji and the Marquesas. MUSORSTOM, which rests on an international network of collaborating taxonomists, is the most ambitious ongoing program of deep-sea zoological exploration. The present volume contains contributions by eleven authors from Japan, New Zealand, USA and Europe, and deals with deep-sea corals (1 paper), bryozoans (1), isopod and decapod crustaceans (6), and snake eels (1). The results present new data on the morphology, systematics and distribution oL more than 250 species. One new subfamily, five new genera and 60 new species are des~ribed . Of broader biological interest are the descriptions of new biological associations, e.g., between hermit crabs and Zoanthidea, and between acrothoracican cirripedes and corals. Carrier shells (Xenophora) were found to incorporate into their shells species of deep-sea corals that have otherwise never been collected by conventional means, which draws attention to the still inadequate sampling intensity of the tropical deep-sea benthos. The bryozoan genus Pseudothyracella, previously known as a Paleogene fossil in Europe and North America, is added to the list of «living fossils», being represented by a new, living species. The MUSORSTOM series is a joint program of the Muséum national d’Histoire naturelle and the Institut Français de Recherche Scientifique pour le Développement en Coopération (ORSTOM). 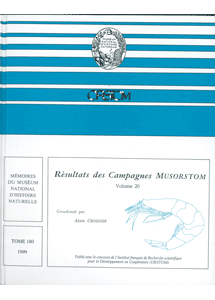