Ever since the explorations of the Danish Expedition to the Kei Islands, led by the famous zoologist Th. MORTENSEN in 1922, the eastern seas of Indonesia have been renowned as a hotspot of marine biodiversity. In 1991, the French-Indonesian KARUBAR cruise took place on board R.V. Baruna Jaya 1 in the Banda and Arafura Seas, off the Kai and Tanimbar Islands (Eastern Indonesia). The expedition, which bad a dual zoological and fisheries goal, collected a rich material of deep-sea benthos between 200 and 1200 m. Scattered faunistic results have already been published elsewhere, but the present volume is the first consolidated report, consisting of a narrative and 13 contributed articles on the systematics and biogeography of Scleractinia (1 paper), Mollusca (5 papers), Crustacea Decapoda (6 papers) and Crinoidea (1 paper). Among the more remarkable results is a review of the highly diverse azooxanthellate coral fauna from the Philippines and Indonesia, and a description of a major new hennit crab assemblage. Altogether the contributions report new data on over 400 species of invertebrates, of which 97 species and 11 genera are described as new. The volume is richly illustrated with numerous photographie plates, line drawings and 2 colour plates, representing living animals. Because of the key biogeographical position of Indonesia, the results presented in this volume bear relevance to a vast region in the tropical Indian and Pacific Oceans. 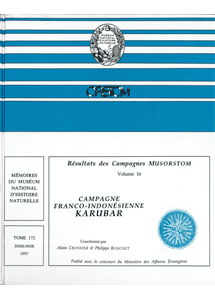