The volume presents a detailed study of the oldest skeletons of didelphid marsupials, those of Pucadelphys andinus. They are exceptionally well preserved and represent one of the major discoveries in marsupial paleontology in the last decades. The specimens (several partial skeletons) come from the early Paleocene of the Santa Lucia Formation at Tiupampa (Bolivia). The first part of the work gives a short presentation of the locality of Tiupampa, its age, taphonomy and a mammalian faunal list. The second part deals with the skull and dentition, and presents a survey of the cranial features of the early tribosphenic mammals. The dental structure of Pucadelphys andinus favours its classification within the family Didelphidae. The third part of the volume analyses the postcranial skeleton. The latter is compared with that of the small Recent didelphids, thus permitting an interpretation of the way of life and locomotion of Pucadelphys andinus. 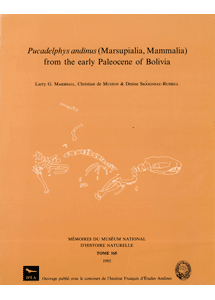