Citation:
PEREZ FARFANTE I. & KENSLEY B. F. 1997. — Penaeids and Sergestoid Shrimps and Prawns of the World : Keys and Diagnoses for the Families and Genera. Muséum national d'Histoire naturelle, Paris, 233p. (Mémoires du Muséum national d'Histoire naturelle ; 175).
* To see the promotions applied to this product, add it to your cart (see "My cart") 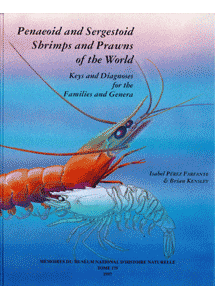