Atlas of the amphibians and reptiles of France

This new Atlas of the amphibians and reptiles of France is the third produced by the French Herpetological Society (SHF). It underlines the remarkable progress achieved in the knowledge of the distribution of the 34 amphibian and 39 reptile species present in metropolitan France and Corsica. In addition to these 73 native species, the book also gives the geographical range of eight species that have been introduced, intentionally or not, and that have acclimatized (six amphibians and two reptiles). The atlas draws from a total of 179 426 observation records (including 135 226 since 1990) by more than 6 000 observers. The range map for each species is accompanied by at least one photograph and commented by one or several specialists. Information on the spatial distribution, including elevational range, and on the conservation status is also provided. In addition to the species fact sheets, the book features an updated taxonomical list of amphibian and reptile taxa found in the country, as well as a chapter explaining the numerous changes that have occurred in the names of families, genera and species over the last few years. Given that understanding the past is indispensable for interpreting biogeographical data, a chapter by two palaeontologists gives an overview of the known fossil records and retraces the shaping of our country’s modern herpetological fauna. A special chapter deals with conservation issues, and the red list of threatened amphibians and reptiles of France is presented. Fifty-five specialists have collaborated in writing the texts, with references to a total of 847 publications. 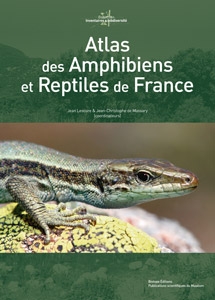