Non-geniculate coralline red algae are historically and biologically fascinating organisms of considerable ecological importance. Their taxonomy has been attended by a particularly confused nomenclature, and their scientific history has been full of controversy and debate. The Muséum national d'Histoire naturelle, in Paris, houses one of the most extensive and taxonomically and historically important collections of these algae in the world, including the original specimens of J.B. Lamarck, redicovered during the present study. For the first time, this huge collection was throughly searched for types: 200 were found, catalogued and photographed, and nomenclatural and other information have been provided for each. The book also includes biographic sketches, handwriting samples, and portraits of persons from J.B. Lamarck (ca 1780) to M. Lemoine (ca 1980) whose types are represented at the Museul. It also includes historical analyses of French-based and French-influenced studies of these algae in the context of the development of botanical research at the Muséum. In addition, brief biographic notes are provided for over 150 other persons who collected specimens now housed at the Muséum. With over 1000 bibliographic references and 369 photographic and lithographic plates, this book represents one of the most significant publications on non-geniculate coralline algae to date and is destined to remain a standard reference for phycologists, curators, and historians of science. 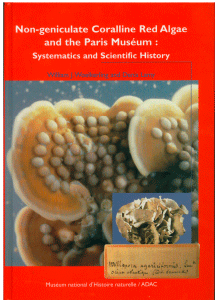