The Coreidae (Insecta Hemiptera) from Madagascar are revised, including all taxa known to occur in the area. Two subfamilies, twelve tribes, twenty nine genera, one subgenus, and sixty nine species are treated in detail. Four new genera and nineteen new species are described and placed in the subfamily Coreinae. Three new combinations are proposed and five species are synonymised. Two genera (Latimbus Stål and Oncaspidia Stål), and one species are recorded for the first time from Malagasy. Dorsal habitus illustrations for at least one species of each genus, as well as 200 drawings of morphological details, male and female genitalia of some of the species are provided. Bilingual keys to all Malagasy subfamilies, tribes, genera, subgenera and species are included. New distributional records are added. 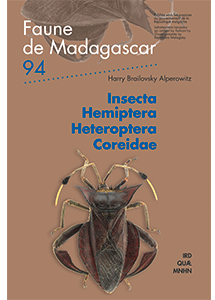