Isaac Johannes Lamotius (1646-c.1718) and His Painting of Indo-West Pacific Fishes and Other Marine Animals

The archives of the world’s libraries and museums are filled with little seen and under appreciated treasures, but few objects are as exquisite and unknown as the paintings of fishes and invertebrates made by Isaac Johannes Lamotius on the tiny Indian Ocean island of Mauritius and in the Moluccas in the late 17th century. Alone and isolated from a former intellectual life in Holland, and burdened with the nearly impossible task of governing a small but rather unruly band of Dutch colonists, Lamotius consoled himself by studying the then unknown flora and fauna of the island. During his governorship, and for some time afterward when he was exiled to the island of Rosengain in the Banda Archipelago, he devoted his spare time to drawing and painting aquatic animals, primarily marine fishes. Although he probably produced much more, all that has survived to the present day is a set of 250 colored drawings, the complete collection of which is reproduced here for the first time. Hidden in the recesses of the now Central Library of the National Museum of Natural History, Paris, the paintings shown here were brought to light by Georges Cuvier in the early 19th century but identified with Lamotius only in 1959, when one of the authors made a detailed comparative study of this work and several related sets of drawings that formed the basis of a number of 18th-century natural history publications. These images are vastly superior to any contemporary effort. For many species, the drawings represent the first human record of their existence; the scientific accuracy is such that nearly all can be readily identified with currently recognized species and are provided with collecting data. Together the drawings represent the earliest known description of the marine zoology of Mauritius and, for that matter, one of the earliest such studies of the fishes and marine invertebrates of any Indo-west Pacific locality. With scientific and historical comments, these images come to life after having been essentially lost from public view for more than three centuries.

Lipke Bijdeley Holthuis was born 21 April 1921 in Probolinggo, E. Java, Indonesia. He studied biology at the National University in Leiden, The Netherlands, obtaining his Ph.D. in 1946. From 1941 until his retirement in 1986, he was staff member at the National Museum of Natural History, Leiden, being in charge of the collection of Invertebrates and after 1950 also of that of the Crustacea. His main interest is in the Macrurous Decapod Crustacea, but other groups also have his attention. After his retirement he still visits the Museum regularly. Theodore W. Pietsch is professor and curator of fishes in the School of Aquatic and Fishery Sciences, and Burke Museum of Natural History and Culture, at the University of Washington in Seattle. His primary interests are in marine ichthyology, especially the biosystematics, zoogeography, and reproductive biology of deep-sea fishes. He has also published extensively in the history of ichthyology and the history of science in general. Among the latter are works on Georges Cuvier, Louis Renard and Charles Plumier; and on the history of natural history collection-building.

Foreword by Perry Moree, National Library of the Netherlands 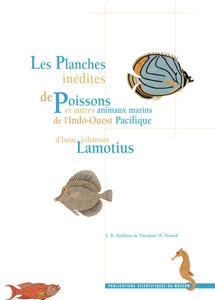