The unpublished plates of Foraminifera by Alcide d'Orbigny

the dawn of micropaleontology

Alcide Dessalines d’Orbigny (1802-1857) has left a prestigious and fruitful scientific work which is exceptional by its extent, the importance of its implications and the diversity of the topics in which this enthusiastic researcher and accomplished naturalist was involved. With his first work devoted to foraminifera (unicellular microorganisms, with a shell apt to be fossilized), he established the foundations of Micropaleontology, without any idea of its important implications in geosciences, especially in Paleoceanography and Paleoclimatology, in oil prospection and construction projects, such as the building of the tunnel beneath the English Channel. The plates of foraminifera drawn by d’Orbigny resulted from several years of observation; they intended to illustrate the pioneer work of foraminifera studies, but they remained unpublished although they became an unavoidable reference for many scientists. Of a high quality, they testify to their author’s keen sense of observation and talent as an artist. It was important to publish them. They are presented in this volume and analyzed by Marie-Thérèse Vénec-Peyré who recounts their history, places the species into the current scientific context and gives information on the standard material preserved in the micropaleontological collections of the Muséum national d’Histoire naturelle. Specialist of extinct and extant foraminifera, Marie-Thérèse Vénec-Peyré particularly studies these microorganisms as indicators of past environments. Director of Research at the CNRS, she works in the UMR 5143 Department of History of Earth at the Muséum national d’Histoire naturelle (CNRS - MNHN - Université Pierre et Marie Curie), “Paleobiodiversity and Paleoenvironments”. Being in charge of the conservation of the micropaleontological collections of the MNHN, she was naturally designated for the writing of this book. Thus she continues the micropaleontological tradition initiated at the Muséum by Alcide d’Orbigny, founder of Micropaleontology and first holder of the chair of Paleontology at the MNHN.


Citation:
VÉNEC-PEYRÉ M.-T. 2005. — The unpublished plates of Foraminifera by Alcide d'Orbigny : the dawn of micropaleontology. Muséum national d'Histoire naturelle, Paris, 302 p. (Des planches et des mots ; 2).
* To see the promotions applied to this product, add it to your cart (see "My cart") 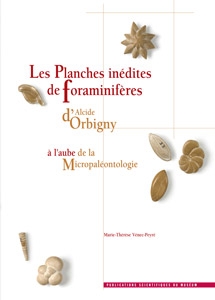