We refer here exclusively to the Polycystine Radiolaria, which live today in practically all marine environments, and have a fossil record that goes back to the Cambrian. The preservation of their delicate siliceous skeletons below the carbonate compensation depth gives them the potential to date the deep sea sedimentary deposits of ancient oceanic basins. This is especially true for radiolarites, which are notorious for their lack of other datable fossil materials. This specific advantage was recognized in the late 1970s, as was their significance and utility in providing age constraints necessary for geodynamic reconstructions and understanding the evolution of past oceanic realms.

This volume represents the current state of the taxonomy of Paleozoic radiolarian genera, as reached by the consensus of over a dozen radiolarian workers active in the field of Paleozoic radiolarian studies. The idea for its preparation matured during the 12th Conference of the International Association of Radiolarian Paleontologists (InterRad) in Nanjing, China (September 14-17, 2009). Its Mesozoic counterpart had just been published (O’Dogherty et al. 2009) and was on display during the Nanjing conference, so that we all were able to measure its important added value. The Paleozoic Genera Working Group (PGWG) of InterRad was thus set up to distill the current state of knowledge on Paleozoic radiolarian genera and to present it through an illustrated and annotated catalogue." 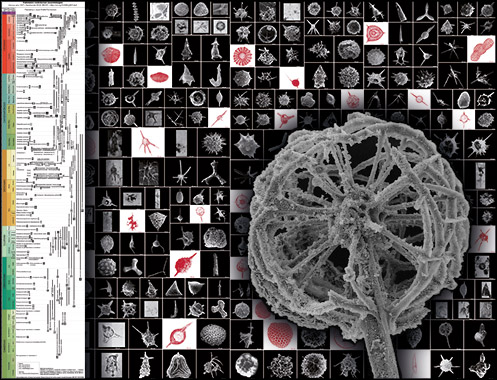 An illustrated catalogue and revised classification of Paleozoic radiolarian genera

Historical insights on nearly 130 years of research on Paleozoic radiolarians

This article is a part of the thematic issue Catalogue of Paleozoic radiolarian genera edited by Taniel DANELIAN et al.
Download full article in PDF format See article
Back to journal